Question 1: February 2010 marks 60 years since the establishment of diplomatic ties between Romania and the Socialist Republic of Vietnam and 55 years since the establishment of the respective diplomatic representative offices in Hanoi and Bucharest. How would you characterize this period in terms of the developments in the relationship between Romania and Vietnam?

Answer: Vietnam and Romania have enjoyed the traditional relationship over the past 60 years. The people of Vietnam always remember and are grateful to the valuable support and assistance that the Government and people of Romania have extended to Vietnam during our struggle for national independence and development.

Today, our traditional relationship is strongly developing in various areas, making positive contributions to the national economic development of each country.

The reliable political relations and cooperation between the two countries have been relentlessly strengthened. The two sides continue to keep high-level visits and contacts, and increase exchange of delegations at ministry and agency levels, showing the diverse bilateral cooperation and creating favourable political settings for promotion of effective economic and trade relations between Vietnam and Romania. The visit to Vietnam by Romanian President Ion Iliescu (16th -18th February 2002) and the visit of Vietnamese President Tran Duc Luong to Romania (16th -17th October 2003) are important events, generating a new momentum for the promotion of bilateral ties.

Economic and trade relations between Vietnam and Romania have seen remarkable progress. The two-way trade value increased from 20 million USD in 2002 to 90 million USD in 2008. However, this number is still small compared with the demand and potential of the two countries.

The relations in culture, education and training, and labour between the two countries are developing very well, bringing about practical outcomes.

Vietnam and Romania have been supporting each other and closely cooperating in the international organizations and multilateral forums for the interest of peace, stability and development in the region and the world.

Question 2: The agreement on commerce and payments between the Government of Romania and the Government of the Socialist Republic of Vietnam, signed on December 4, 1991, under which economic and commercial exchanges between the two countries were conducted before Romania’s accession to the European Union, is about to be replaced with an economic cooperation agreement. How far have negotiations over this agreement reached and when do you reckon it will be concluded and signed?

Answer: Since Romania joined the European Union, the two countries have agreed to revoke the Trade and Payment Agreement signed between the Government of Romania and the Government of the Socialist Republic of Vietnam in 1991.

Based on the fine traditional relationship, Vietnam and Romania launched the negotiations on a new Economic Cooperation Agreement between the two countries in February 2006 in order to create the favourable conditions for promotion of bilateral economic relations.

The two sides have finalised the negotiations and will officially sign the Economic Cooperation Agreement in Bucharest this June. This is an important event marking a new development stage in the cooperation between the two countries. 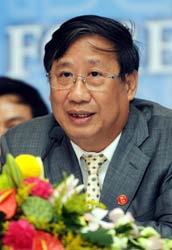 (On the occasion of the visit by H.E. Deputy Prime Minister and Minister of Foreign Affairs Pham Gia Khiem to Romania from 23rd to 25th June 2009)

Question 4: There are close ties between Romania and the Socialist Republic of Vietnam in the fields of education and culture. What do you intend to do to strengthen cooperation in the future?

Answer: We deeply appreciate Romania’s assistance to Vietnam in training over 3,000 highly skilled officials. These people have been making positive contributions to the cause of reform in Vietnam and many of them are now holding important positions in the State apparatus. Today, Vietnam pays special attention to training high quality experts to serve the national construction and development. Therefore, we look forwards to our continued and closer cooperation in education and training.

To promote our practical and effective cooperation, both sides are now negotiating to conclude the Programme on implementation of the Cooperation Agreement on Culture, Science, Education and Sport 2009- 2012.

Question 5: Mr. Minister, how do you think the future of the Romania-Vietnam relationship should look like and what is the message you are bringing along to Bucharest?

Answer: It is our duty to maintain and promote the traditional friendship nurtured by our previous generations for more than half a century in order to cement our relations and bring about practical outcomes to our national development.

I hope that our two countries will continue support for each other and coordinate actively at international fora in the interest of the two countries and for peace, stability, cooperation and development in the region and the world at large.

My message during this visit is that Vietnam attaches great importance to the relations with Romania and wants to further enhance the excellent traditional friendship and cooperation with Romania, thus elevating the bilateral ties to a new level of greater effectiveness and practicality.